The Citizen of the World - SAHAJA MEDITATION COLORADO 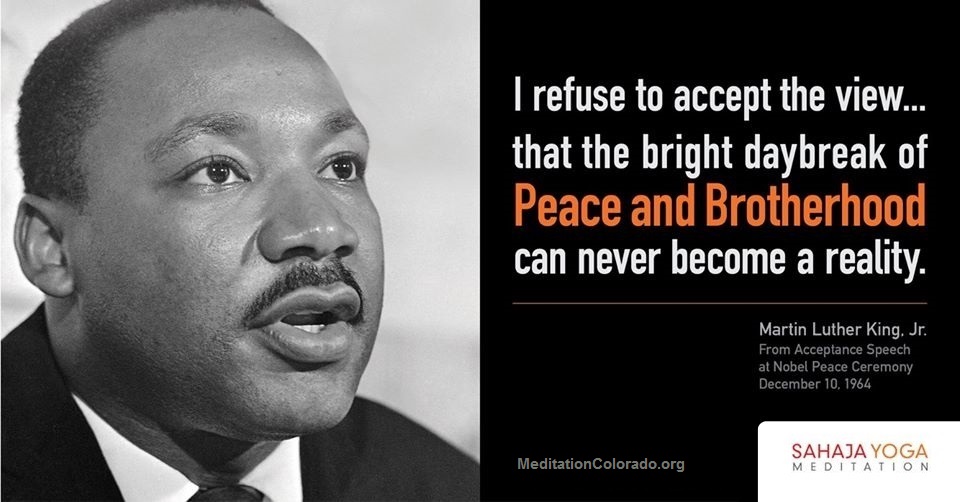 Since 1986, every third Monday of January is observed as Martin Luther King day in the United States. Martin Luther King, Jr. (January 15, 1929 – April 4, 1968) was an American activist and prominent leader in the African-American Civil Rights Movement using nonviolent civil disobedience. He became a national icon in the history of American progressivism. On October 14, 1964, Dr. King received the Nobel Peace Prize for combating racial inequality through nonviolence.

Can you recognize the essence of Martin Luther’s King life, ideals and words of truth in Shri Mataji’s following quote, describing a Realized person?

“Today world needs only Peace. Everything else that we have today is worthless without peace. We have to see how peaceful we are … Have you not found peace in Sahaja Yoga? … basically we are people who believe in peace, because without peace no growth can take place. There has to be complete peace. If there is peace in your heart, if there is peace surrounding you, you grow into a beautiful nation. Not out of fear, not out of pressure, but from inside, if you are person who has complete peace within the heart, not that he is not afraid of anything, but he emits peace. He gives peace. Anybody who goes near such a person, gets the peace, the feeling of peacefulness. You all have got your Realization. That is, your Spirit is now emitting Vibrations of Peace and Joy. Wherever you are, you will emit peaceful vibrations. You will create peace. You’ll find out ways of creating peace, how to establish peaceful atmosphere. It’s very important that we have to grow in such a manner that we create peace and give peace to others and become examples of it.“

Did you know? Martin Luther King, Jr. was directly influenced by Mahatma Gandhi’s testament to the revolutionary power of non-violence.
Dr. King argued that the Gandhian philosophy was ‘‘the only morally and practically sound method open to oppressed people in their struggle for freedom’’.

– MY PILGRIMAGE TO NONVIOLENCE-
(by Martin Luther King, Jr., excerpt)

“Then one Sunday afternoon I traveled to Philadelphia to hear a sermon by Dr. Mordecai Johnson, president of Howard University. Dr. Johnson had just returned from a trip to India, and, to my great interest, he spoke of the life and teachings of Mahatma Gandhi. His message was so profound and electrifying that I left the meeting and bought a half-dozen books on Gandhi’s life and works.

Like most people, I had heard of Gandhi, but I had never studied him seriously. As I read I became deeply fascinated by his campaigns of nonviolent resistance. I was particularly moved by the Salt March to the Sea and his numerous fasts. The whole concept of “Satyagraha” (Satyu is truth which equals love, and agruha is force: “Satyagraha,” therefore, means truth-force or love force) was profoundly significant to me. As I delved deeper into the philosophy of Gandhi my skepticism concerning the power of love gradually diminished, and I came to see for the first time its potency in the area of social reform. Prior to reading Gandhi, I had about concluded that the ethics of Jesus were only effective in individual relationship. The “turn the other cheek” philosophy and the “love your enemies” philosophy were only valid, I felt, when individuals were in conflict with other individuals; when racial groups and nations were in conflict a more realistic approach seemed necessary. But after reading Gandhi, I saw how utterly mistaken I was.

Gandhi was probably the first person in history to lift the love ethic of Jesus above mere interaction between individuals to a powerful and effective social force on a large-scale. Love, for Gandhi, was a potent instrument for social and collective transformation. It was in this Gandhian emphasis on love and nonviolence that I discovered the method for social reform that I had been seeking for so many months. The intellectual and moral satisfaction that I failed to gain from the utilitarianism of Bentham and Mill, the revolutionary methods of Marx and Lenin, the social-contracts theory of Hobbes, the “back to nature” optimism of Rousseau, the superman philosophy of Nietzsche, I found in the nonviolent resistance philosophy of Gandhi. I came to feel that this was the only morally and practically sound method open to oppressed people in their struggle for freedom. ”

The Citizen of the World